‘Tis the day after Thanksgiving and it was more than time to unwarp the loom; I had tried to set up for some inkle weaving, but had horribly miscounted, and nothing was working right, and I’d put up the loom (on the top of a six foot bookcase so it would stop taunting me) until I was ready to face it.
And today it was finally cool enough on the porch to enjoy sitting outside in the fresh, fragrant air and unwind the warp onto four cones while admiring the lizards as they hunted bugs.  The joys of living in the south definitely preclude snow. 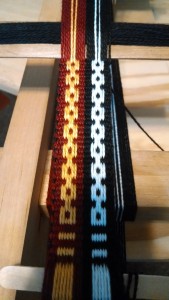 However, add a few extra loops and we can turn this into something more interesting.  One set of loops went around pattern strings 1, 2, 5, and 6 of each colour, and the other went around pattern strings 3 and 4.  Now when inkle weaving, you alternately push the open strings below and above the heddled strings to make the shed.  But to make this pattern, when the open strings are pushed down, the loops are pulled back up to create floats.  By alternating between sets of loops, I could create squared off boxes, that look like chains if you tilt your head sideways a little. 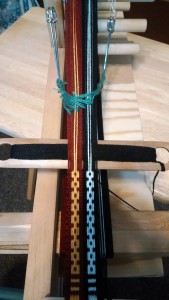 In this picture showing more of the loom, you can see how I’ve run large kilt pins through the two sets of supplemental loops so that I only have to grab one pin or the other as needed.

Now all I need to do is find a good tv-show to marathon, and I can finally finish this weaving project. 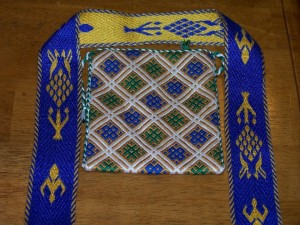 I spent a lot of time drawing Celtic Knots this summer, in a little journal.  It helped me meditate, as it were.  And it’s been a while.  But the journal was here, lunch time was here, and my embroidery was a 10 minute drive away.

I have been reading about Fresnel lenses, and wondered what would happen if I started similar structures in a knot.  This first knot is still fairly straightforward, and I already have several ideas on how I can expand/improve it for the next version.  So let’s look at the in-progress pictures where I’m using the method described in the Celtic Knots Class Handout.

This past week I was seized by the inexplicable need to make Christmas Decorations.  Or perhaps you could say that Christmas was my excuse for folding 144 identical modules (12 modules per cube, 12 cubes …) and combining those cubes into a wreath. 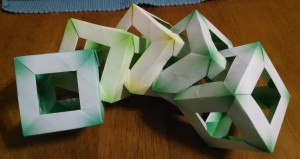 We began with some experimentation.  Folding a few cubes, and making sure that they could interlock, and more importantly, that interlocking them would allow for the curvature needed to make the full wreath.

The green on these cubes is subtle; I was using patterned paper with the four corners tinted, graduating to much paler tints in the center.  You can see the box in the background in the second picture. 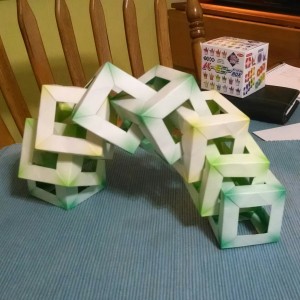 Eight cubes folder, and a very satisfactory curvature.  Plus making the cubes stand and slither was fun.  I could easily see myself folding a long line of cubes and then just dangling them and waving them about.  The cubes are amazingly resistant to abuse, although when Molly the white demon dog got her teeth on the ninth cube the slobber killed it. 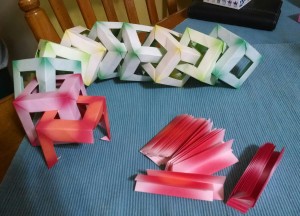 Now in the home stretch; the red modules have been counted and partially folded, and we were off to the races. 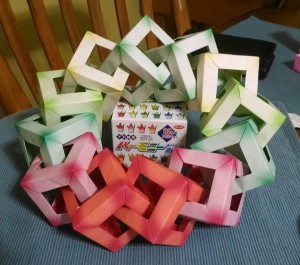 It’s possible we may be putting up a tree this year.