Note: this is a picture heavy post. And I’m learning about wordpress’s new block editor, which is its own brand of fun. So layout is a trifle simplistic.

In the summer of 2019 I purchased a 12 harness tableloom from Egypt; it came packed in a lovely box, some assembly required. Which also allowed me to learn a lot baout how the whole loom was constructed. Here is what she looks like as I’ve assembled the castle – the structure that houses the 12 harnesses – and am about to tie the harnesses up to the levers that control them.

Since then she was assembled, I warped her up, I started weaving, I had shoulder surgery, covid hit, cancer hit, and … just recently I started weaving again. And I’ve been playing with weaving patterns that use 12 harnesses. I’ve been posting quick pics on facebook, but realistically, I would like to start collecting the patterns in a logical place. Like, uh, here …

And then I made the colossal mistake of stopping for 2 years … and not marking my spot in the pattern. (So the restart had … issues. And then I made a weaving mistake. And then … yeah. We’ll weave this one off and hide the bad bits.)

But meanwhile as I’m weaving I’m fantasizing about new patterns. Preferably ones that are less fiddly than this one because the fiddly doesn’t work as well as I would like because I’m working with fairly fine thread (10/2 cotton) so that the individual details fade out over any kind of distance. So after some inspirations from handweaving.net (where I had oodles of fun searching for other patterns with the same threading) the next two patterns I want to try are below. The difference is that these patterns are easier on the brain, because the changes are very predictable. Well, at least the first one.

In contrast this pattern below is very different from the previous patterns, in that it has much longer floats. Now if I was weaving in wool the floats wouldn’t worry me in the slightest, because in the wet finishing the wool always felts to itself at least a little. But the current warp is cotton, which will shrink but not felt. On the other hand, this warp is set at 30 epi (ends per inch) so a 5 thread float is one sixth of an inch long. That’s about 4mm. It may be manageable. Especially if I end up throwing these into the feast kit for placemats. 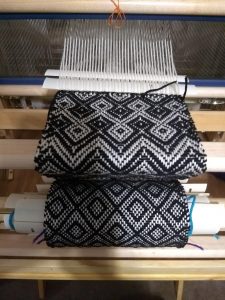 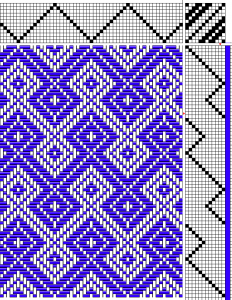 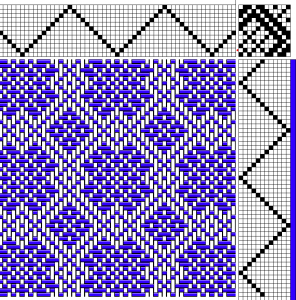 So last night my new 12 shaft Voyageur Leclerc table loom arrived.  Unpacking her was an adventure; she was packed in a wood shipping crate in a cardboard box, with much tape.  Pity the customs inspector who had to open her up.  (Although I don’t think anyone did, actually.  She arrived ship shape and bristol clean, as it were.)

So my first project is going to be a series of mug rugs.  My goal is to experiment with the weave structures, so I’ve measure up about 5 yards, give or take, of 4/8 superwash wool (which is heat resistant and flame resistant).  79 ends, which I will be using at 12 ends per inch.  One copy of the pattern is 22 threads, so this gives me enough room for 3 repeats, with about 5 threads on each end.

So patterns.  Turns out you can do a lot with 12 harnesses … The following are just a small collection of possible patterns, all warped identically.  It’s how the harnesses are lifted and in what order that makes all the difference … 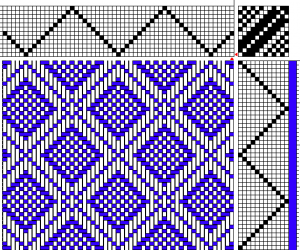 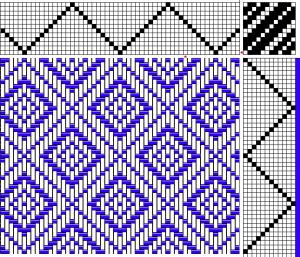 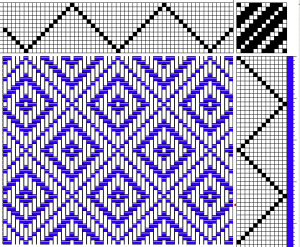 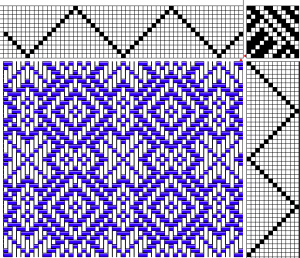 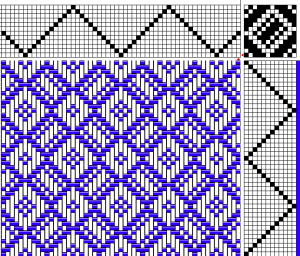 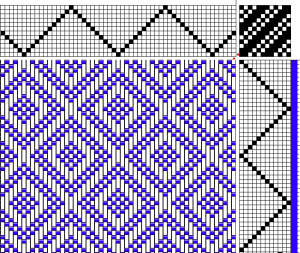 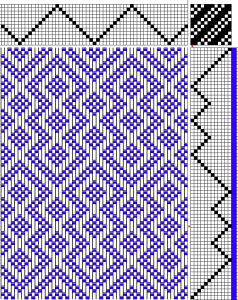 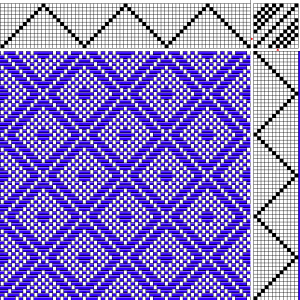 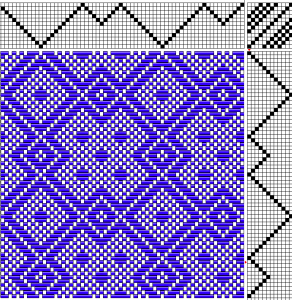 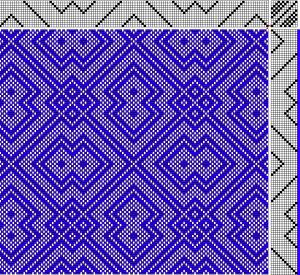 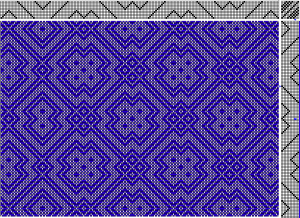 So I’ve been idly daydreaming, along with friends, about getting looms with moar harnesses! And wondering how much of a difference it would make, and how I could draft patterns for it …

And I like brick-work.  One of the first patterns I worked out how to tablet-weave from first principles was the woven in version of Birka strapwork.  So here, for my first case of many harness pattern drafting, I present the 8 and 12 harness versions of birka strapwork.  Now all I need is the loom to weave them by … 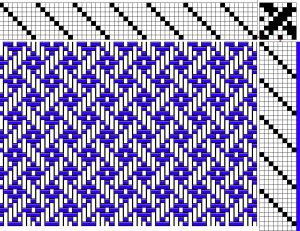 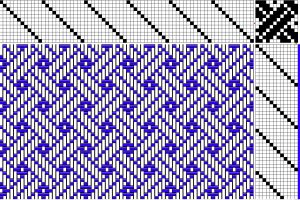 Developing these was actually an interesting exercise in Escherian tilings; you have an 8×8 (or 12×12) grid that’s tiled horizontally and vertically, and so you want to set it up so that the repeats tile nicely.