I was reminded last night that the correct order of operations is embroidery first, coffee doctored with Bailey’s second.  Especially when you’re sticking with one colour of thread at a time, so have to carefully count and embroider the next bit and place it on the right spot on the fabric.  In brickstitch, an “off by four” error is … well, the short version is that I will be pulling a Penelope and undoing all the stitches I set last night before I can continue.  So the planned picture of the project’s progress will get delayed.

On the other hand, I have fallen into old rabbit holes again.  Someone recently asked who my hero was, and the sad thing is that my hero – or rather heroine – is the nameless protagonist of the Ballad of Heer Halewijn (wikipedia); Heer Halewijn himself is a malevolent character who likes to kill maidens, because hey, whatcha gonna do when you’re bored, right?  The heroine – usually unnamed but sometimes called Magteld – is a princess who gets permission from her brother to deal with him (after everyone else in the family has said no, leading to a common trope of “Keep asking, kid, until someone says yes”).  She meets him, flirting happens, he offers to let her choose her own death, she chooses beheading … and then steals his sword and chops his head off while he’s distracted.  Ironically of the 40 or so couplets of the ballad, his death is one couplet – two lines – only.  Then she washes his head, takes him home, and presents him to her parents.  For those of you familiar with the Vorkosigan saga, Cordelia’s triumphant return with the Pretender’s head (but not associated body parts) is eerily reminiscent.

I mean, as a young girl growing up, how can you not aspire to be this kind of princess?  Being rescued is … nice, but doing your own rescuing?  Much faster.

Searching out that information reminded me of the Dutch Song Database, which is a treasure trove of old songs, including a project on Souterliedekens (with audio).  To quote the description:

Souterliedekens are rhymed psalm translations in Dutch, set to popular tunes. They were made by the Utrecht nobleman Willem van Zuylen van Nyevelt, who is also responsible for choosing the more than 150 melodies. In this way he hoped to get the youth to sing psalm texts. The Souterliedekens were published in Antwerp in 1540. It is the first complete Psalter in any European vernacular. Nowadays we are most interested in the music: thanks to the melodies of the Souterliedekens, represented in mensural notation, we can sing many of the original secular texts. These texts are only known from sources without music, such as the Antwerp Songbook (1544). By combining the texts from the Antwerp Songbook with the melodies of the Souterliedekens we can reconstruct the popular music of the sixteenth century.
You can listen to the first stanza of all the Souterliedekens, sung by a choice of Dutch and Flemish singers, recorded in 2001 for the Repertorium of Dutch Songs until 1600.

I am happily rooting around in that database in my spare time.

Brickstitch is quite addictive in a lot of ways; it’s very geometric and the final product often looks as though the fabric was woven rather than embroidered, especially from a distance.

I hypothesize that this is due to the embroidery stitches all being parallel.

In any case, I like to work patterns out in a software program called inkscape which is a free vector based drawing program available in windows, mac os, and linux (and I use it under linux). 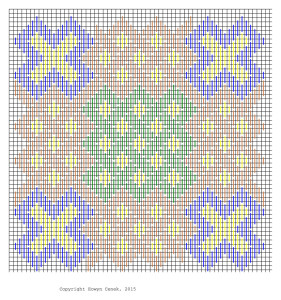 So I was doodling, and created the following pattern.  In dark colours you can’t see the implied knotwork (in black the boundaries are just plain invisible, sadly) but in lighter colours the knotwork should be subtle but visible.  Since I will be embroidering an entire pouch in gold, green, and blue for the hubby, we will test that theory most assiduously.

Except that hubby wants the following colour changes: