I’ve had a few requests about the rest of the Baltic pickup style patterns I came up with.  Like the previous, these are all woven on the same warp, and again, the patterns are designed so that you are always pushing threads down from the upper row and never lifting threads up from the lower row.  This speeds up the weaving immensely. 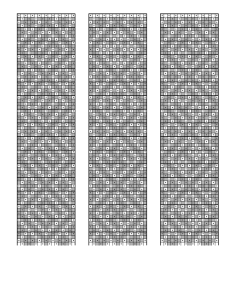 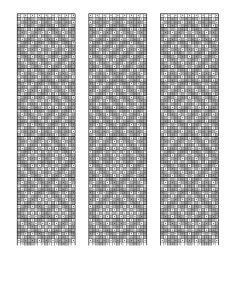 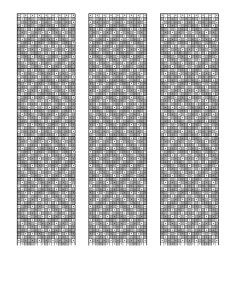 And that’s when I realized that two of the patterns are duplicated, but a little judicious work with a pencil will fix that quite easily.  🙂

So a friend of mine asked me about the trim in https://www.pinterest.com/pin/120400990016540518/, which is a picture (source unknown, because pinterest) of the neckline of a tunic that has been embroidered and embellished by trim.

Looking at the trim, you can see that the outermost three cards on each edge have been threaded with four threads of the same colour; 2 cards are tan next to the pattern, the outermost card is all black.  Now when I first saw the picture I couldn’t see it up-close, so I didn’t notice that the inner pattern was actually three colours (each card has 2 white, 1 black and 1 dark blue thread), but the pattern is obviously based on the Egyptian Diagonals technique using 10 cards.

My first stab at the pattern; the 10 cards are each threaded identically with 2 dark and 2 light, and then arranged so that if all the cards were turned forwards you would get chevrons pointing up.  You can see the starting position below the squares: the two circles represent the colours of the threads in the two top holes; bottom row is closest to the weaver, top row is furthest from the weaver, and the | or / indicates the direction the string travels through the card.

The pattern is read bottom to top, where each square is one column, each row of squares = 1 turn of the pattern.  When the square’s background is grey, the card turn backwards towards the weaver; when it’s white the card turns forwards away from the weaver.  As you can see, most of the time the cards turn together, but there is a central part of the pattern where half the cards turn in one direction and the other half turn in the opposite direction.  It is because of these central 4 rows that the pattern is not twist neutral which is why – if using an inkle loom or similar to weave the trim – a weaver will often alternate between the two versions of the trim, since weaving one copy of each will result in a twist neutral pattern.

Note that the bottom and top 4 rows are not included in the repeat.

(And here the top and bottom 5 rows are not part of the repeat.)